Product successfully added to your shopping cart
Quantity
Total
There are 0 items in your cart. There is 1 item in your cart.
Total products
Total shipping  To be determined
Tax $0.00
Total
Continue shopping Proceed to checkout
Home / Azerbaijan and Uzbekistan 14 days Private Silk Road Tour
Reduced price! 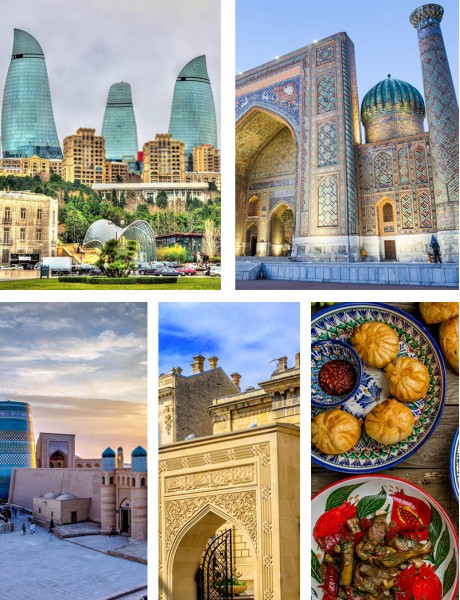 -Meeting at the airport and transfer to your comfortable hotel.
The hotel locates within a 3 km radius to the city center and has 4 stars.
For the first day, you can have a rest, and enjoy Baku`s streets.

Our tour guide will meet you in the lobby of the hotel at 10 am. and you will be guided to below destinations:
-Old City Baku (History of Maiden Tower, Shirvanshah`s Palace, and traditional hammams, testing local wines and to get more information about Castle Walls.)
-Haydar Aliyev Museum - Exhibitions and museums about the history of Azerbaijan
-Highland Park visit (The best panoramic view to Baku)
-Carpet Museum
-Boat tour on the Caspian Sea (VIP tickets included. Note: Boats are operating only in clean weather)
-Drop off to the hotel (approximately 5-6 pm).

On the third day, we will go to the history of Azerbaijan more deeper.
-Qobustan National Museum
-Qobustan Petroglyphs Rock Art Museum
-Mud Vulcanos in Azerbaijan
-Lunch at a local restaurant (included)
-Ateshgah Fire Temple
-Yanardag - Fire Mountain
-Drop off to the hotel

Day 4 - Trip to the different landscape

On the fourth day of our tour we will pick you up from your accommodation and we will drive to Qabala. On the way we will visit:
-Diri Baba Mausoleum
-Juma Mosque - the oldest mosque of the Caucasus
-Lahic Village - Ancient village in Ismayilli city
-Arrival at the hotel in Qabala

-The first destination in Gabala will be Nohurgol lake which is surrounded by forest. There you will have a chance to ride on a boat.
-The next destination is the "Seven Beauty" Waterfall. It needs 120 steps of stairs to go up.
-The third destination will be the "Tufandag" Winter-Summer Tourism Complex which is famous for its cableway trip and skiing activities.
-Another destination to enjoy our trip will be the "Gabaland" Entertainment Center.

Sheki is a must-visit and historical city in the center of Sheki district and region. It is located in the southern foothills of the Greater Caucasus.
In Sheki we will have a tour to:
-Palace of Sheki Khans - The Palace of Shaki Khans in Shaki, Azerbaijan was a summer residence for the Shaki Khans. It was built in 1797 by Muhammed Hasan Khan.
-Historical Museum of Sheki`s culture
-House of Hand Crafts which you can buy original handmade works for a very reasonable price.
-Upper Caravanserai - Caravanserai – is a historical monument in Sheki, a part of which is used as a hotel.
-Lunch at a local restaurant in Sheki and taste "Piti" which is the local famous food of Sheki.
-Albanian Church at Kish village - In the 1st century A.D. St. Elishe, a disciple of Thaddeus of Edessa, arrived at a place called Gis, where he built a church and recited a liturgy. The church became the "spiritual center and the place of enlightenment of people of the East".
-Shop national sweeties of Sheki
-Back to Hotel in Qabala city.

Day 7 - Back to Baku to the Airport - Flight to Tashkent, Uzbekistan

We will check out from Gabala hotel and we will transfer you from Gabala to Baku Heydar Aliyev International Airport directly. Then you will have a flight to Tashkent which is included in the total price of the tour.
-Meeting at the airport in Tashkent and transfer to your comfortable hotel.
-Free time in Tashkent
-Overnight at the hotel

Day 14 - Transfer to the Airport

4-star hotels with breakfast in each country
Entrance fees
Guide: English speaker Guide/Driver
Comfortable Transport: Private car
Air ticket from Baku to Tashkent
Air ticket for domestic Tashkent-Urgench air ticket
VISA for Azerbaijan and Uzbekistan
Souvenirs as a gift.
You just need an air ticket from your home to Baku and from Tashkent to your home.