Product successfully added to your shopping cart
Quantity
Total
There are 0 items in your cart. There is 1 item in your cart.
Total products
Total shipping  To be determined
Tax $0.00
Total
Continue shopping Proceed to checkout
Home / All Blog News>Silk Road Caravanserais of Azerbaijan 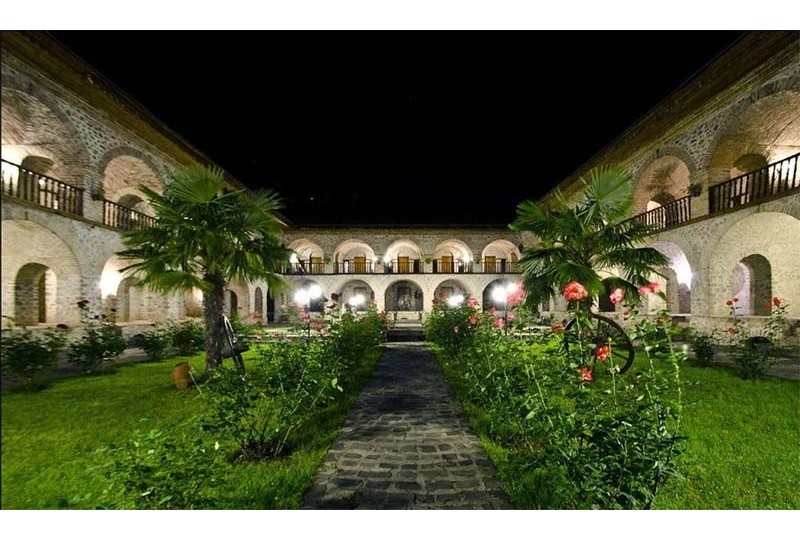 First caravanserais which we walk calls Bukhara caravanserai which is located in Old City in Baku near to Maiden Tower. According to research, this historical mnument was built in the 15th century by merchants who came from Central Asia to Baku. Merchants who travelled from Eastern countries were in the need for temporary places to stay, so they used to have a rest in this caravanserais. The structure has the shape of a square, with a convex portal. Inside the caravanserai there is pool located in the center of yard. The walls of caravanserais are decorated with the pictures from ancient Azerbaijani carpets, kilims, decorations, pictures depicting Baku.
Second Caravanserai in Baku is Ateshgah Fire Temple. After Islam introduced to the locals Zoroastrian temple was destroyed. But in the 15th-17th centuries the Hindus-fire-worshippers came to Absheron with trading caravans began to make pilgrimages to Surakhany. The Indian merchants started erection of the temple. During the 18th century a caravanserai were added to the central part of the temple.

Multani Caravanserai located opposite to Bukhara Caravanserai. Multani related to 14th century and for main construction of caravanserai were used traditional Shirvan-Absheron architecture school. Multan is a city of Pakistan and this place was served as a stopping place for merchants and fire worshippers from India.

Ganja city locates in west part of Azerbaijan and it is main location of Greater Silk Road.
Ugurlu bey caravanserai was built in the early XVII century by architect Sheikh Bahaddin Mohammed Amil. The clay-lime mixture and egg whites, red bricks were used in the construction of the building. At present, the building is located in Ganja, Ali bey Huseynzade street. Ugurlu Khan Caravanserai is close to another Caravanserai in Ganja which is named Shah Abbas. Historical caravanserai was built in the beginning of the 17th century in Ganja by the order of the ruler Shah Abbas and bears his name. The two-story building of the caravanserai, built in the oriental style, includes 15 halls and 54 cells. In the yard there are places for pack animals. Servants, cooks and musicians worked in the caravanserai to serve the guests.

Caravanserai locates in Garghabazar village of Fuzuli region. For the purpase of communication caravanserais are used widely as the means of regulating interstate commerce and it is a memory of XVII century.

And Finally about Sheki Caravanserais.

XVIII-XIX centuries there are 5 large caravanserais in Sheki, however till now two of them existing which are Yukhary and Ashagy Caravanserai. They also made for stay of Travelers and caravans and was built according to the nature of its function. Even today you can stay in Yukhary Caravanserai and feel the history.
The caravanserai describes Sheki architecture on its plan structure, large size, the comfort of leisure and business.

References used for this article: