Product successfully added to your shopping cart
Quantity
Total
There are 0 items in your cart. There is 1 item in your cart.
Total products
Total shipping  To be determined
Tax $0.00
Total
Continue shopping Proceed to checkout
Home / BIG SALE! 4 night/5 days tour in Baku
Reduced price! 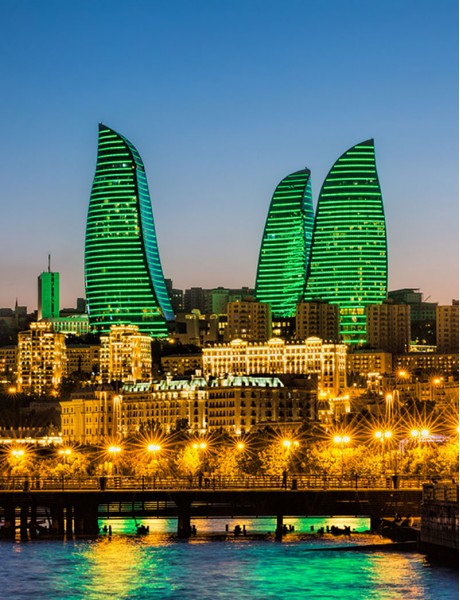 The first day depends on your arrival time. If it is late time then for the first day you will be directly transferred to your Hotel. And we will make our first-day tour on the second or fourth day.

But if we have enough timing for making a 5 hours tour then we will start our first day Baku City tour.

On this tour, we will pick you up from your hotel and will come directly to İçəri Şəhər which means in English: Old City. At İçəri Şəhər you will feel the smell of history. Old City included to the UNESCO`s World Heritage List. At Old City, you will get information about ancient walls, Maiden Tower (Qız Qalası - the traditional symbol of Baku) the history of Shirvanshahs` Palace and Traditional hammams of Azerbaijan.

We will also show you the magnificent store with handmade products made by families in Azerbaijan for social project. At Old City, we will give you a chance to test our local wine which made by pomegranate. There you will also try our local fast food which name is "Qutab". Qutab presents with cheese, meat, green and pumpkin inside.

Then we will drive to the Carpet Museum where you can get information about the art of carpet weaving in Azerbaijan.

But Highland Park it is not the only place to make photoshoots of Baku. We will get VIP tickets for you to Boat Cruise tour on the Caspian Sea.

After Boat tour, we will drop off you to your hotel.

Our first day will take about 5 hours, and all entrance fees included in the tour price.

-Pick up from Hotel

On our second day of the tour, we will visit a place with 40,000 years of history. Gobustan State Reserve is very rich in archeological monuments, the reserve has more than 6,000 rock carvings, which depict primitive people, animals, battle-pieces, ritual dances, bullfights, boats with armed oarsmen, warriors with lances in their hands, camel caravans, pictures of sun and stars

Qobustan consists of 2 parts - One part is Museum for having a virtual tour to the landscape, and the second part is a real landscape where all these happened.

After getting knowledgable historical information, we will have some adrenaline. So we will take old Russian Lada car of 1989 years and our driver will drive us to Mud Vulcano on the roads with bad condition.

Azerbaijan has the most mud volcanoes of any country, spread broadly across the country. 350 of the 800 volcanoes of the world are in the Azerbaijani Republic. You will get information about the structure of Mud Vulcanos.

Then we will drop off you to your hotel.

Entrance fees included to the price.

At our third day we will pick you up from your hotel and the tour to Shamakhi and Lahij Village will start.

On this tour, we will have total about 400 km driving to go and back. On the way we will stop on below destinations:

-Diri Baba Mausoleum - a mausoleum that built 1402 for a holy person and still attracts locals as a pilgrimage place.

-Juma Mosque Shamakhi - The oldest and largest mosque in Azerbaijan, Shamakhi Juma, according to the legend was built in the 8th century when Shamakhi was chosen as residence by an Arabian caliph. The initial Arabian inscription on the portal of the mosque said that the mosque had constructed in 743.

-Seven Gumbaz mausoleum - complex, mausoleums that built for the family member of the Khan of Shamakhi around 17th centuries.

And our final destination will be Lahij Village. Lahij is one of the most ancient inhabited cities in Azerbaijan that located in Ismailli region. Lahij is the best example of original architecture that preserved by villagers more than centuries. Lahij Village entered to List of the Intangible Cultural Heritage of UNESCO because the village was one of the best handcraft and trading centers in the Caucasus. The main fame of the village comes from handmade copper products with a magnificent design that all made in the village in the traditional way.

After walking at this ancient, traditional and historical village we will have local Lahij dolma (local food) and will come back to Baku.

Our fourth day will be in Baku. On this day you will get information about why Azerbaijan calls as Land of Fire.

We will visit the Ateshgah Fire Temple and Fire Mountain.

Tour will last about 4 hours.

Transfer from Hotel to Airport

Lunch for the Shamakhi&Lahij tour