Product successfully added to your shopping cart
Quantity
Total
There are 0 items in your cart. There is 1 item in your cart.
Total products
Total shipping  To be determined
Tax $0.00
Total
Continue shopping Proceed to checkout
Home / Private Tbilisi - Kakheti - Zaqatala - Sheki - Baku Tour for 7 days 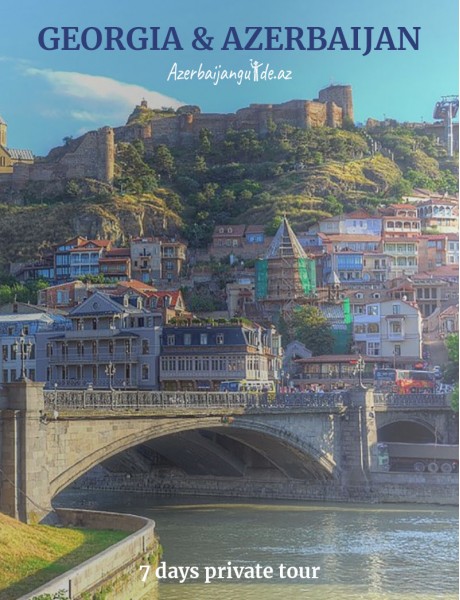 This tour covers private sightseeing visits to 2 cities of Georgia which are Tbilisi and Sighnaghi and 2 cities of Azerbaijan which are Sheki and Baku. We will organize private cars; guide/driver, the 4-star hotel including breakfast, return airport transfer and many more. Just read carefully the itinerary and check inclusions. For both countries, you will enjoy free dinner at local restaurant with traditional music. You will enjoy your 7 days with Caucasian hospitality and culture.

-Arrival transfer to the hotel
-Free day in Tbilisi

Holy Trinity Cathedral of Tbilisi
We start at Holy Trinity cathedral one of the largest orthodox cathedrals in the world.
Metekhi Cathedral
The Metekhi Virgin Mary Assumption Church or Metekhi Church is a Georgian Orthodox church located on the left bank of the Mtkvari river, on Metekhi Cliff, in Avlabari neighbourhood, opposite the old town of Tbilisi.
Monument of King Vakhtang Gorgasali
The legendary founder of Tbilisi.
Narikala Fortress
Take a cable car to Narikala Fortress to enjoy a breathtaking panoramic view of the city.
Jan Shardeni Street
Walk down to the district of Sulphur bath houses passing by Tbilisi’s mosque. Stroll through the Sharden area full of narrow streets with cozy cafés, wine tasting bars, souvenir shops, and breathe in the living past. Visit Sioni Cathedral, Anchiskhati basilica and the clock tower of famous Rezo Gabriadze Theatre.
Mtskheta
Have lunch at a local restaurant. After lunch, drive to Mtskheta, one of the oldest towns, the cultural and religious center of Georgia. Mtskheta was the capital of the Eastern Georgian Kingdom of Iberia from the third century BC.
Jvari Church
Visit Jvari church a true architectural masterpiece of the early Medieval Period built on a hilltop.
Svetitskhoveli Cathedral
You will enjoy the views of the confluence of the Aragvi and Mtkvari rivers. Visit Svetitskoveli, the main cathedral of Mtskheta and a sacred place where the robe of Christ is being kept.
Return to Tbilisi.

Kakheti Region The region is located in east part of Georgia and it is the biggest region in the whole country. Kakheti is home to some of the oldest human habitations in the entire Caucasus region. After excavations archaeologists have assumed that wine has been produced here for several thousand years. Almost everywhere you go, you are invited to have glass of red or white wine. Here you will find Georgian sweets “Churchkhela”, called “Georgian Snickers” by foreigners. Kakhetian Traditional Wine making Factory (KTW) On the way, we visit one of the largest wine and spirits producing companies in Georgia and Caucasus region “Kakhetian Traditional Winemaking”. You have possibility to taste Georgian wine, that has different taste and aroma comparing to European wine, it is unlike any wine you’ve tasted before!
Badiauri
Next, we go to Badiauri where you are welcome to taste delicious Georgian bread, cheese and Chacha.
Khareba Winery
Winery Khareba is the largest Georgia’s wine cellar. There are perfect storage conditions for wine, 7,7 km of tunnels and galleries maintain a constant temperature of 12-14 degrees 0C. You have walking tour with local guide where you’ll find out more information and details about wine and taste it. The complex has excellent restaurant and beautiful landscape.
Sighnaghi
Signagi is one of the most beautiful towns in the country, with its unusually peculiar architecture, charming houses, cobblestone streets, defensive wall and spectacular views of the Caucasus range. Sighnaghi was nick-named ‘the city of love’ for all the weddings it hosts and beautiful story of Niko Pirosmani. Sighnaghi is an incredibly romantic little town that will touch everybody’s hearts.
Sheki
Passing the Georgian-Azerbaijan border and arrival to Sheki

Sheki Khan's Palace
The Palace of Shaki Khans in Shaki, Azerbaijan was a summer residence for the Shaki Khans. It was built in 1797 by Muhammed Hasan Khan.
Sheki Karvansaray Upper Caravanserai - Caravanserai – is a historical monument in Sheki, a part of which is used as a hotel.
Church of Kish Albanian Church at Kish village - In the 1st century A.D. St. Elishe, a disciple of Thaddeus of Edessa, arrived at a place called Gis, where he built a church and recited a liturgy. The church became the "spiritual center and the place of enlightenment of people of the East".
Sheki Fortress Visit to: -Sheki Historical Museum -Sheki Handmade Ceramic Shop -Try Sheki local sweeties

Day 6 - Transfer from Sheki to Baku

Nohur Lake Great Lake surrounded with forest. You can walk on the shore and you can sail a boat. We will have 1 hour time to enjoy there and there is a restaurant which you can get lunch.
Yeddi Gozel Waterfall Seven Beauty Waterfall
Lahic Visit the famous ancient and historical village of Azerbaijan
Juma Mosque in Shamakhi - The first mosque in the Caucasus
Diri Baba Mausoleum On our tour to Sheki we will visit sightseeings on the way. First destination will be Diri Baba Mausoleum in Maraza settlement.
Baku - Arrival to Baku

Baku Old City At Old City we will see:
-Old City Walls
-Maiden Tower
-Shirvanshahs` Palace
-Local Pomegranate Wine testing
Heydar Aliyev Cultural Center You will get tickets to enter to the different kind of museums inside building.
Azerbaijan National Carpet Museum Get to know more about Azerbaijan`s Carpet Tradition.
Upland Park Get the best view to Baku from Highland Park
Baku Boulevard Get VIP tickets to the Boat Cruise Trip on Caspian Sea. After the cruise you will be dropped off to your hotel. Please be informed that, at bad weather condition the boats not operating.
Heydar Aliyev International Airport Return transfer to the Airport.

Inclusions to the tour package: